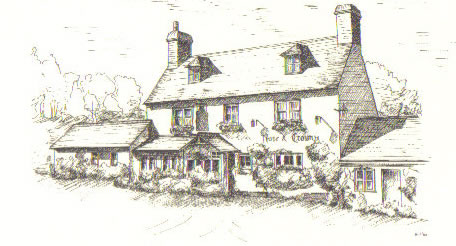 The pub has a long and interesting past including for a small period in the 1800's being called the' Waggon & Horses' & being owned by the very local Miller, John Sutton, who also had the nearby cottages built.

On the evening of 20th August 1889 Hammond John Smith left the Taproom of the Rose and Crown to make his way home to Sheldwich. The next day he was found in a barn on adjacent land having bled to death after a vicious assault the previous evening. His two assailants, James Foster and James Packman, were arrested the next day and after trial James Foster was sentenced to 14 years 'penal servitude' for the manslaughter of Hammond John Smith. This all started that wet August day when the three men involved argued about who could cut an acre of corn the fastest.

Hammond John Smith is still with us though, sometimes found getting up to mischief in the kitchen with his liking for the ladies!

The old saloon bar was home to the dartboard that was the centrepiece to the Guinness World record held in the 1980's for a darts match marathon and the third of the three original bar rooms was the lounge bar, or where the ladies went and also housed a bar billiards table, once a common feature in a pub but now hard to find.

The Woodcutters cottage was a separate two roomed home that housed a family of twelve in the early 1900's and only became part of the pub in the 1980's when a doorway was knocked through where the dartboard used to hang. At the same time another doorway was knocked through into the skittle alley, now our rather long narrow restaurant and home to old farm tools, corn dollies & brewing memorabilia.

The Pub custom probably first came from woodcutters and farm workers through until the 1970's when the custom became less local due to the increase in car ownership, but all the way through until the early 20th century those that brought the corn to be ground and those that worked at Shottenden mill.